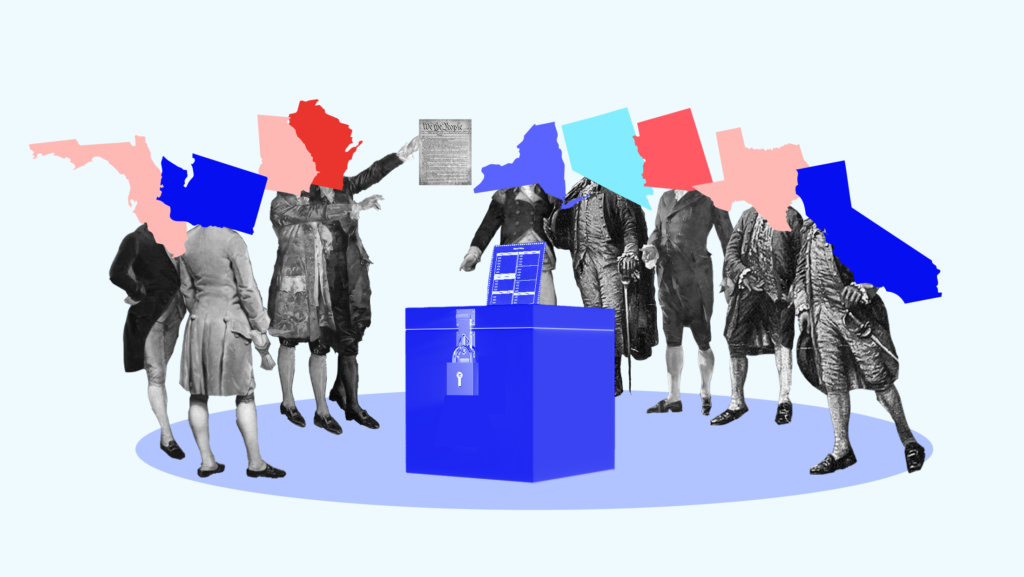 If you were to look for a right to vote in the U.S. Constitution or Bill of Rights, you might have trouble finding one. Surprisingly, nowhere in the original text does it say that U.S. citizens have a right to vote. Instead, much of the government’s authority to protect voting rights stems from amendments adopted following the civil war and legislation passed during the civil rights movement. But thanks to a voting-rights skeptical U.S. Supreme Court and the Senate’s failure to pass new voting legislation, this authority has been severely weakened.

There was no right to vote in the original U.S. Constitution.

The original Constitution doesn’t have much to say about the right to vote. Indeed, nowhere in the text does it explicitly say that citizens have the right to vote in elections. Instead, it merely states that anyone eligible to vote for the largest house of a state’s legislature is also eligible to vote for members of the House of Representatives from that state. As a result, states were left with the power to decide who qualified to vote, leading to considerable variation in the nation’s early years. While most states initially restricted voting to property-owning or tax-paying white men, some states, like New Jersey, allowed free Black men and women of both races to vote provided they met the property or tax requirements. While states soon began expanding voting rights to more citizens, this process unfolded unevenly because it was left up to each state. New Jersey actually revoked the vote from Black men and women in 1807 and North Carolina didn’t remove a property qualification until 1856. Similarly, Wyoming granted women the right to vote in 1869, long before all women achieved it nationally. This variability continues today, which is why felons can vote in some states but not in others.

However, that’s not to say the Constitution says nothing about elections. Through the Elections Clause, it gives Congress and the federal government the power to determine the “Times, Places, and Manner” of congressional elections. Congress has used this power throughout the nation’s history to, for example, establish a single national Election Day and mandate single-member congressional districts. The regulations proposed by congressional Democrats’ Freedom to Vote Act that standardize elections and make voting easier rely on this power. However, the ability to preempt state regulations does not extend specifically to voting qualifications. The Constitution also requires all states to have a representative form of government with elections and majority rule, but this part of the constitution is rarely invoked by Congress or the federal courts.

After the abolition of slavery and in response to a growing push to extend voting rights to more Americans, a series of constitutional amendments added protections to the right to vote to the U.S. Constitution:

Importantly, these amendments give Congress and the federal government the power to enforce the amendments’ protections of the right to vote through legislation — which is a power Congress has used. The Enforcement Act of 1870 (also known as the Civil Rights Act of 1870 or the First Ku Klux Klan Act) empowered President Ulysses S. Grant to enforce the 15th Amendment by making it illegal to disenfranchise Black voters and allowing the president to use federal marshals to bring charges against offenders. Similarly, the landmark Voting Rights Act of 1965 (VRA) relies on Congress’ power to enforce the 14th and 15th Amendments and gave the federal government and individuals multiple tools to challenge racially discriminatory voting practices. As a result, the amendments not only created strong protections for the right to vote, but gave the federal government a greater active role in enforcing that right.

The ability of the federal government to protect voting rights, particularly for racial and ethnic minorities, has been jeopardized both by recent Supreme Court rulings and the failure of Congress to enact new voting rights legislation.

The VRA has been the primary tool to enforce voting rights in recent years and was reauthorized with overwhelming bipartisan support in 2006. The Supreme Court rulings in Shelby County v. Holder (2013) and Brnovich v. DNC (2021), however, severely weakened it, making it more difficult for the government to block discriminatory voting practices.

In response, congressional Democrats proposed a new voting rights bill called the John Lewis Voting Rights Advancement Act to update and revise the VRA. Republicans in the Senate filibustered the bill, leading Democrats to combine it with the Freedom to Vote Act in an attempt to circumvent the filibuster using a rules change. Unfortunately, that effort also failed in the face of unanimous Republican opposition and the reluctance on the part of some Democrats to change filibuster rules. As a result, while the federal government still technically has the power to protect voting rights and regulate elections, it currently lacks sufficient tools to do so in practice or the ability to create new ones.

Until Congress acts, states must step in to protect voting rights.

With the federal government and the Supreme Court unlikely to protect voting rights in a substantial way in the near future, it’s up to the states to take action to protect voting. We previously outlined some steps individual states can take, like removing barriers to voter registration, making casting a ballot as easy as possible and passing a state-level voting rights act.

Litigation under state constitutions could be another way to protect voting rights. Even though the U.S. Constitution doesn’t contain an explicit right to vote, almost all state constitutions do. While voting rights cases are typically brought in federal court, legal observers have suggested they could be brought in state courts instead. As a strategy, this parallels how activists have been able to use state constitutions in Pennsylvania and North Carolina to limit partisan gerrymandering after the Supreme Court decided partisan gerrymandering claims can’t be decided by federal courts. While this would be a new approach, the urgency of protecting the right to vote demands creativity in the face of obstacles.

Of course, a state-by-state approach is no substitute for a national solution. That’s why it’s essential to continue pushing for national legislation to restore the VRA and create uniform standards for conducting elections. Another important step would be to pass a voting rights amendment to finally enshrine an explicit right to vote in the U.S. Constitution. In the world’s oldest modern democracy, it’s the very least we can do.